International Women’s Day (IWD) is a global day which celebrates the social, economic, cultural, and political achievements of women.

In recognition of IWD 2022, at Cowgills we have asked some of the women within our organisation to give a bit of background about their roles, challenges they have faced regarding gender equality and what advice they might give to other women starting out or thinking of a career in the sector.

I am a partner at Cowgills and oversee all the tax functions within the business.

I was driving to Cowgills in Bolton from Didsbury six years ago for the interview and I said to my husband: ‘This is going to have to be a bloody good firm if I am going to be doing this journey every day’. Six years later……

I had already been a partner elsewhere for seven years by that time and I was looking for a permanent home; a firm where I would be happy to stay and grow.

Partnership is a lot like a marriage – you have to work at it every day and in reality, you never get what you want all the time. It works because you can compromise for the greater good.

I am not sure what it means to be ‘supported as a woman’ but what I do know is that we are a very equitable firm (greater than 50% of our workforce is female!) and we have never consciously been biased in regards of gender.

However, it is the unconscious bias that we need to tackle to make sure that women are getting the same progression opportunities in the firm as their male counterparts, and we are facilitating females to be able to get to the very highest levels within the firm.

I have faced significant gender discrimination during my career. Especially during the early days when sexism and inappropriate comments from clients and colleagues was a lot more frequent and accepted. We have come a long way from those days but more needs to be done.

I was bought up in a pub and so I have never been frightened to call out inappropriate behaviour. My parents taught me that I should value my right to choose and when someone demonstrates sexist, or gender-based discrimination I have always had the confidence to identify and rebuff it. This isn’t true for everyone and so we need to teach everyone, male or female, that gender bias is unacceptable, and it should be identified and called out.

Professional services tends to be well populated by women, but if you look at the senior roles there is a marked drop off of females – usually this is due to childcare responsibilities and the fact that having a career can be difficult when you have children – the expectations regarding working practices and flexibility usually make it so difficult to juggle both, that female talent disappears from business. This cannot be good news for the business and more significantly the economy.

My advice to women coming into accountancy or any professional services is look at the workforce – look at the directors and the partners and see where women are represented equally – these are more likely to be firms that have progressive practices where women can develop and progress.

I joined Cowgills as a newly qualified ACA in 2001 initially working in management accounts/outsourcing.

An opportunity quickly arose in the corporate finance team to work on compliance specials/financial forecasting and I’ve never looked back. I’ve been fortunate enough to have had varied exposure to lead advisory, both buy-side and sell-side, financial due diligence and even a detour to practice management for Cowgills internally.  My key role is now in strategic support which covers pre and post-transaction services.

Although I have been at Cowgills for over 20 years my role has continually evolved and adapted, and I feel lucky to have had all the opportunities which have come my way.

I can honestly say that I’ve always felt 100% supported by Cowgills. In my experience, at Cowgills gender is irrelevant to success and performance – ability and opportunity are the fundamentals.

I have had two children whilst working at Cowgills and whilst I think it is impossible to “have it all”, I have always felt supported by the firm.

I haven’t encountered any problems with clients, staff or partners which could be attributed to my gender.

I attended an all-girls school and I strongly believe this environment gave me the confidence and skills to believe that no doors were closed for me on the basis of gender. It simply wasn’t a consideration.

Gender balance is important within the team but the only instance I can recall is being asked to attend a meeting to demonstrate our diversity!

Speak to as many people as possible to understand the wide variety of roles available.

Have an open mind to career pathways. When I trained in audit & accounts the end game was qualification but in reality, that is only the start of your journey. Having said that the fundamentals I learnt pre-qualification are still needed in my current role.

Never stop learning, it will be a sad day if you have nothing new to learn.

I had a bit of an unusual entry into the accountancy sector. I left university and started at HM Customs and Excise (as it was then) in an entry-level job in VAT dealing with EC Sales lists. I did a few different roles in HM Revenue & Customs, including a stint in the Debt Management Unit, and as an Officer in various teams, but always VAT. In the end I took the leap and moved into practice.

I’ve worked at a few different sized accountancy firms, from top ten, to big four, as well as independent North West based firms.  I joined the tax team at Cowgills in Summer 2021.

A role in VAT advisory is a lot different to what most people think of a traditional tax role – we do much less number crunching and more reading and interpreting legislation and VAT case law.  Essentially, we’re problem solvers!

The sector has come a long way, but there’s always more that can be done to improve equality, and create opportunities for women and girls.  For example:

Most women have encountered gender bias, whether consciously or unconsciously. Things like:

I think it’s really important for everyone to call out bias, and challenge inappropriate behaviour in all of its forms, wherever they see it.

It’s down to all of us to create welcoming, respectful, unbiased workplaces where all of our people can flourish.

There are such varied roles, there’s something for everyone. Especially at a firm like Cowgills where you have the opportunity to make a difference. Our people are our best asset, and our values are to support our team every step of their career. There are so many great role models here, and in the wider industry, and no two days are ever the same. 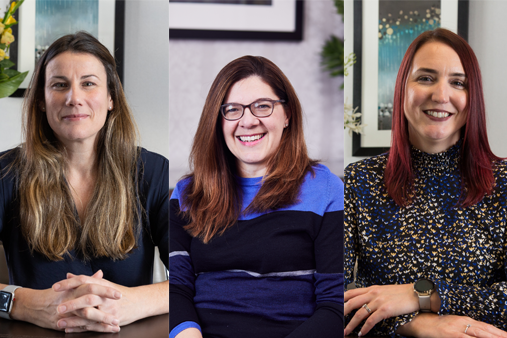