Chancellor Rishi Sunak announced a number of changes to the Coronavirus Job Retention Scheme (CJRS) last week. We explain the changes below.

As widely anticipated The Chancellor has announced changes to the CJRS. These changes are intended to continue to support businesses as they slowly emerge from the lockdown and prevent job losses that might be saved in the medium to long term.

Critically, from 1 July, employers will be able to put staff on part-time furlough, claiming the CJRS grant for a portion of their salary. However, they will only be able to claim going forward if they have previously claimed under the pre 1 July scheme (CJRS V1). As the minimum furlough period remains at three weeks any new period of furlough leave must have started by 10 June 2020 to be complete when the current scheme ends on 30 June, to ensure the employee remains eligible for the new furlough scheme from 1st July (CJRS V2).

The proposed changes also introduce a new limit to the number of staff who can be included on a claim. This will be based on the maximum number of staff claimed for, and included in, any single pre 1 July claim.

The Chancellor also confirmed that from 1 August the CJRS grant will no longer cover the cost of employers’ National Insurance or pension contributions with employers expected to cover these costs.

CJRS V2 – What is changing?

Initially the fundamental terms of the scheme remain the same in July, (the lesser of 80% of pay and £2,500) however the Government intends to reduce its contribution on a sliding scale over the remaining months of the scheme (August to October) – with a corresponding increase in the employer’s contribution.

Whilst the revised scheme has many of the same features as the current one there will be some significant changes intended to encourage those previously furloughed back to work. In summary, these are:

Therefore, if you have a claim under CJRS V1 but have not yet submitted do so now!

If you believe you will need to furlough staff that haven’t yet been furloughed, you have until 10 June before you lose the ability to claim for them in the future.

If you do have a query relating to CJRS please contact our dedicated team HERE, we are here to help. 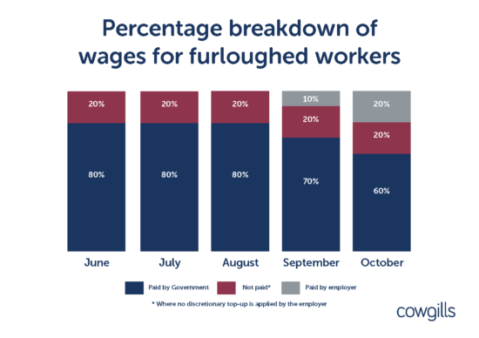 Previous Article
The steps for businesses to take to get back to work
Next Article
‘This is a pause, not a crash’