Our Manchester-based corporate finance team continues to expand after completing more than £108m of deal value in the last twelve months.

The team has advised on some of the region’s most notable deals this year including the sale of Quick Release Automotive to Alten (a French listed company), the trade sale of Roadways, the sale of Assist Group to idverde UK, the MBO of CTI Digital, the private equity backed MBO of The Protein Works and the growth capital investment by Foresight into Steamforged Games. The value of deals completed means that Cowgills is now in the top ten list of north west financial advisors on the Experian M&A review.

Our lead advisory corporate finance team has been based at XYZ in Spinningfields since 2017 and it will expand its footprint in the city when it moves to new office space in Manchester’s central business district next year. With three new additions to the team, Richard Hunter, Brett Marsden and Adam Heywood this brings the total corporate finance headcount to 15.

The team is led by head of corporate finance Ian Johnson. Commenting on the growth of the business and the impending move he said: “The last twelve months has been a period of great success with the team advising on some really prominent deals in the region. We have focused on recruiting a talented and dynamic team who have been instrumental in helping to continue our progression as one of the leading mid-tier corporate finance advisers in the region.”

He continues: “When we established the corporate finance arm of the business we knew that it needed to be based in Manchester’s financial district and that location has been critical to our recruitment and ultimately our success. We are also backed by a superb team of advisory, accountancy and taxation specialists at our head office in Bolton ensuring we can provide our clients with a full service offering throughout the entire lifecycle of their business.

“The volume and scale of the deals completed against a background of such economic uncertainty is great news for the team, the city of Manchester and the wider North West region.”

With offices in Manchester, Bolton, Liverpool and Ilkley, Cowgills is one of the largest independent practices in the region and has a long tradition of delivering excellence for its base of growing SME clients. The firm is investing heavily in recruiting the next generation of business leaders by offering highly competitive  packages, and career progression opportunities, coupled with flexible working hours and benefits. 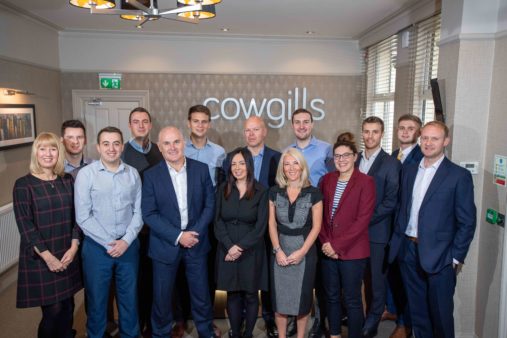