Cowgill Holloway, the Bolton-based firm of chartered accountants, sees results from sponsorship of Middleweight boxer Jack Flatley as he approaches the biggest fight of his career.
Jack Flatley is appearing on the bill at Tyson Fury’s comeback fight, on Saturday 9th June, and will fight Troy Williamson. Both fighters bring unbeatable records to the table, but Troy beat Jack with a contentious decision in the Senior ABA final when they were both amateurs.
Cowgill Holloway works with growing businesses across the region but is proud of its Bolton headquarters and keen to invest in the local community – for the long term. Stuart Stead is a longstanding partner at the firm and trains at the same gym as Jack Flatley.
Jack said: “I’m training harder than I ever have before and am already at my fighting weight. This fight is brilliant for my career and also brilliant to see the rest of Bolton get behind me. The interest and support locally has been phenomenal.
“Without the support of corporate sponsors like Cowgill Holloway, I wouldn’t be able to focus on boxing in the way I have been given the opportunity to. Stuart and the firm have been a loyal supporter month-in, month-out which is the reason I have been able to train and focus to get me to this stage. For now, I can’t think about anything beyond the fight but I hope this is an unbelievable stage of the journey. It’s a dream come true.”
Stuart Stead added: “Jack combines raw talent with grit and hard work to reach his goals. It’s our privilege to be able to follow his journey and wish him the very best for the night. This latest fight is testament to the investment we’ve made to date as Jack reaches another level.”
Cerberus Group is also a sponsor, alongside Cowgill Holloway. 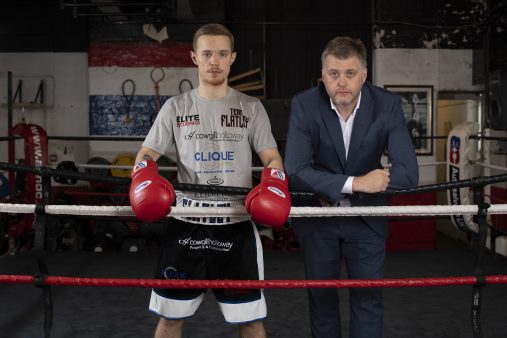