In the second of Cowgills Business Heroes podcasts managing partner Paul Stringer talks to Olympic bronze medalist and recent MBE recipient Steve Parry about his life in sport and how his experience of nearly drowning led him to found an organization which today teaches thousands of young people to swim.

Commenting on establishing Total Swimming Academies, which he runs with his business partner Rebecca Adlington, Steve said: “I set up the business after the 2004 Olympics with my then partner Adrian Turner. Today we deliver swimming lessons for 30,000 children every week, we build swimming facilities and train hundreds of teachers to deliver lessons.

“Between training Adrian and I always brainstormed crazy business ideas and were really passionate about teaching kids to swim. We put £10k in each and started the business providing community swimming lessons. We’d go into schools during the holidays, build a pool then, when the kids came back the next term, we’d teach them to swim. We’d invite the wider community too so as many people as possible had the chance to join in. I’m probably most proud of those early days when we taught over 160,000 children to swim.”

“I was lucky as a kid, my parents had me doing loads of different activities – I was even singing in a church choir at one point. But I had a nasty swimming accident aged eight when I fell into the Thames from a barge and was clinging to the side for dear life. My parents signed me up for lessons at Liverpool’s Woolton swimming baths the next week. I don’t suppose I realised at the time, but it was that event which sowed the seed of making sure every child can swim and which inspired me to set up Total Swimming Academies, not being an Olympic swimmer.”

Asked what the facilities were like in Liverpool in the early eighties Steve said: “We called them the baths back then and I still call them that today! At Garston and Woolton baths I remember the awful footbath, swimming in the Victorian 25-yard pool, splashing about in the learners pool, the smell of the chlorine and having a packet of crisps from the vending machine afterwards. Although I enjoyed it, the facilities were an issue back then and they are an even bigger issue now so I’m proud that we are doing something about it.”

Asked how he progressed from swimming for pleasure to swimming to win Steve said: “As a child I had so much support from my parents, my PE teacher and coaches who encouraged me to start training properly. I was winning races by 14-15 but was still competing in all the other sports I loved so it wasn’t until I was 16 that I committed 100% to swimming. The following year I won the Junior European Championships and that was when I realised I could possibly make the Olympics.

“At 18 I moved to Florida State University which was an easy decision to make – a full scholarship which was worth about $25k as well as three Olympic sized pools, the chance to train in endless sunshine with some of the best swimmers from around the world.

“The comparison between Liverpool and Florida was like night and day at the time and it was obvious that our facilities in the UK did need to be better.

“In 1996 I made some bad decisions and didn’t qualify for the Olympics. That was a big wake-up moment for me and I started taking things more seriously, training harder and treating the opportunity I had with more respect.

“Aged 20, 1997 was a winning season for me with a medal at the European Championships.  In 2000 I didn’t perform as I wanted to but I finally did it in 2004. I probably had 20 failures prior to that one success and I think that’s similar in business, it can take years of time and effort to succeed.”

You can listen to the full interview here, or alternatively, watch it below! 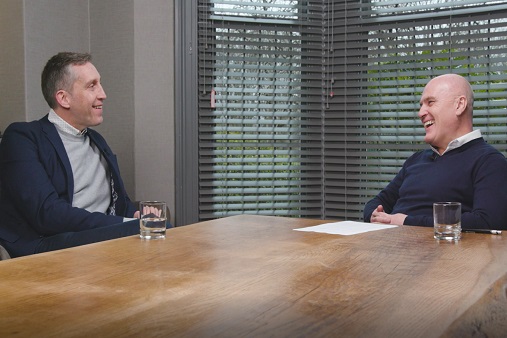