The joint administrators of Llangollen Railway Plc have sold the business and certain assets to Llangollen Railway Trust Limited for an undisclosed amount ensuring a new future for one of north Wales’ most popular leisure attractions.

Alan Coleman, one of the joint administrators together with Jason Elliot at Cowgills said: “The sale has secured the future of this superb heritage railway which is a key attraction to the local area and has provided the best outcome for creditors. We always try and achieve the best outcome financially for the business and to preserve as many jobs as possible and we are extremely pleased to be able to ensure the future of this much loved local attraction.”

A Trust spokesman said: “This was the first key step towards recovery and thoughts now turn fully to the task of preparing for reopening as we continue on our journey to protect and preserve this beautiful part of our heritage.

“Talks have been initiated meanwhile with the Welsh Government, Business Wales, Denbighshire County Council and the National Heritage Lottery Fund, all of which have been positive.”

He added: “The Safety Management System will have to be rewritten to some degree and fresh approval sought from the Office of Rail & Road. Liz Parkes of North York Moors Railway has been helping us in this regard and we are very appreciative of her support.

“We have been very encouraged and gratified by all the support received in our fundraising efforts and thank everyone who has contributed. Including promises, funds raised to date are approximately £85,000.

“This should enable us to submit a competitive bid in the auction on 12 May for key items, such as at least one carriage with accessible adaptation, function coach, road railer, telehandler and 12t crane.

“Looking ahead to the preparation for re-opening phase, £100,000 approximately is needed to cover necessary overheads, for which we hope to attract at least some grant funding. It remains too soon to speculate when re-opening might be but we are targeting the end of July or early August currently.”

The sale excluded the rolling stock, plant and machinery and those assets will be auctioned by Lambert Smith Hampton in May.

Llangollen Railway PLC which operated the historic railway, was not legally able to continue to trade with the company insolvent to the extent of £350,000 with £250,000 relating to engineering contract disputes.  Cowgills were instructed by the board to try and find a buyer for the  line which is estimated to be worth around £8-10m a year to the local economy in north-east Wales. 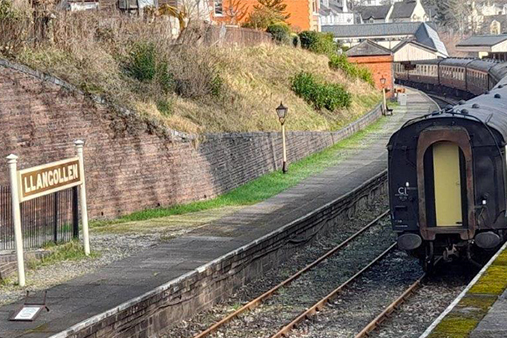