Home  >  News & Insight  >  What are the penalties for not complying with MTD?

What are the penalties for not complying with MTD?

The Making Tax Digital (MTD) deadline is drawing closer. In April 2019, UK businesses that are VAT registered either because they have voluntarily registered or above the £85,000 threshold, will be required to keep, and submit their records, to the HMRC digitally.

However, even with less than a month to go, there’s still considerable confusion in the market around what MTD means for businesses, and specifically the impact of not meeting the MTD deadline.
Luckily, we’re on hand to provide you with specialist advice to help your business adapt to Making Tax Digital as smooth as possible.

What are the penalties for not complying with MTD?

Following on from a consultation in December 2017 the UK Government has published its summary of findings and outlined its planned approach for dealing with late submissions.

From April 2019 (subject to the implementation of a potential grace period) if businesses fail to comply, they will attract ‘points’ and penalties in line with the Governments new two-tier ‘points-based’ penalties regime.

The proposed penalty regime for businesses and individuals will be enforced within 15 days of an overdue tax payment. However, the bill indicates there will be an initial grace period for late filers still getting to grips with the new digital system.

So what is the two-Tier Points Based System?

As mentioned above the HMRC has decided that those who do not comply with MTD will face a new, ‘points-based’ penalty model.

In short, late filing will attract penalty points, which will accrue on the basis of how late the filing is and how many filings have been submitted late.  The Government stated the following in its response paper

Similar to the regime for receiving penalty points for driving offences, these penalty points will expire after a certain period – and can also be appealed if the business or taxpayer feels they are unfairly levied. Typically, points will be erased after four compliant submissions.

What happens with late payment penalties and interest

HMRC’s penalty system for late payments will be different to that applied to late filing.

Interest will accrue on outstanding amounts from the due date until payment.

HMRC has confirmed that there will be a ‘soft landing’ period for late submissions during the first year of MTD for VAT. However, it is not clear whether the current VAT surcharge system will apply to VAT returns submitted under MTD within that ‘soft-landing’ period.

If you would like to speak to someone about this in more details or if you have any questions, please do not hesitate to contact us. 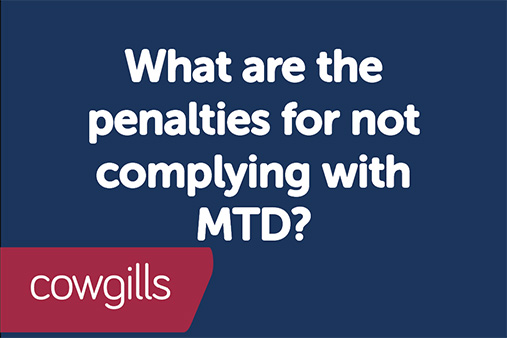